66. Ramcharitmanas: How Can A Human Be God?

HomeRamacharitmanas66. Ramcharitmanas: How Can A Human Be God? 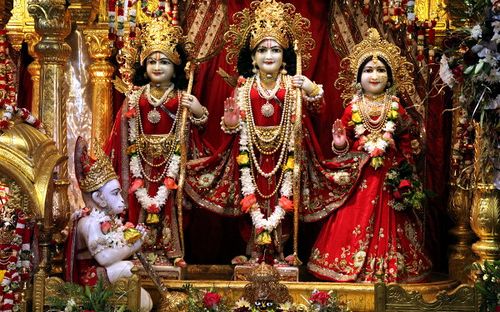 Seated on their celestial thrones, Shiva and Bhavani were shining like the Sun.  The daughter of the Himalayas smiled at Shiva and felt truly content.  She was now inspired to help others, to do something for the greater good of all beings, she said, “O Lord, your glory has spread throughout the entire universe, you are loved by both animate and inanimate beings, please narrate something which can benefit all of humanity.”

“My Lord, you are an embodiment of truth, righteousness, and bliss, you are a repository of dharma, yoga, and non-attachment.  Your name alone saves your devotees from suffering.  Dear Lord, If you feel I am worthy, please remove any illusions in my mind by reciting the story of Rama.  The great saints who speak of Brahman(the supreme reality) also speak of Rama in the same way, how can this be? How can a human be God?”

“The Vedic scriptures speak of Rama, the holy saints praise Rama, you too, day and night with such reverence repeat the name of Rama.  Is this Rama you speak of, the same Rama as the son of the King of Ayodhya? Or is it the inconceivable reality spoken of in the Upanishads?”

If he is just a Kings son, how could he be Brahman, the reality behind the entire cosmos?  If he is Brahman, how can he get tangled in mundane worldly affairs? I am very confused.”

It seems that the concept of Brahman is something completely different from Rama, something inconceivable, beyond all cognition, the grounding of all reality, if this is so, please instruct me about Brahman.  I am confused.  My head wishes to learn about Brahman but my heart is drawing me towards Rama”.

With her hands joined in prayer, Uma asked the questions as to who Rama really was. She placed her head on the ground at Shiva’s feet and requested him to reveal the real conclusion of the Vedas who she was beginning to understand was deeply connected to Rama.

“Reveal to me the mysterious teaching associated with Rama, indeed there is much more here than meets the eye. You are the Guru of the entire world, this birth is so precious and should be used for self-realisation, please bring light to my being so I may experience the bliss you experience.”

Shiva was extremely pleased with Uma’s request for it is extremely rare that beings search for the highest truths, most are left spinning around in worldly affairs.  The hairs on his body tingled as he felt a rush of love, his eyes filled with tears and the image of Rama engulfed his eyes and his heart.  Shiva and Rama are but one in different forms, the supreme bliss is manifested in many different ways.

Shiva sat silently for a while with his eyes closed in meditation, he gently breathed in, and then out, absorbing the pure request of his love. He slowly opened his eyes and joyfully said, “I will recite to you the story of Rama”.

Shiva said, “Due to a lack of knowledge about Rama, the unreal passes us for real.  Just us a rope can be in the darkness confused for a snake, this world of matter is confused for the truth.  But just as when the morning light comes we clearly see the rope, consciousness of Rama reveals the truth of the world.  I reverence Rama with great love, his name is the greatest of spiritual paths.  May the supreme bliss that is Rama be realised as the home of every living.”.”

“It is in your destiny that you receive this sacred story of Rama, consider yourself supremely blessed.  The tale of Rama is so potent it can purify even the most selfish of hearts, it can purify the entire Universe.  Your heart is filled with unconditional love, and all will be revealed as I will recite this story to you for the benefit of all of humanity.”

“By the blessings of Rama, one who is immersed in the pastimes of Rama will never suffer from depression, grief, or ego.  You have honestly expressed your doubts, hence anyone who has similar doubts will find here the answers to their questions.  The ears of those who have not been blessed by hearing this narrative are like empty stomachs! The eyes of those who have not seen holy beings and saints are wasted like the wings of a bird which cannot fly. Those who have not experienced the unconditional love for Rama which exists in our hearts have not experienced the real joy of life.  The tongue which does not repeat his name is like the croaking noises of frogs.  Indeed, this bliss enduing story is beneficial for all of humanity.”

“Like the cow which gives milk to so many of us, the story of Rama brings bliss to the lives of the devoted. Thousands of devotees, saints and Gods have achieved liberation from hearing this narrative, who would not absorb it?”

“Hearing this story is like clapping your hands together to scare away the birds of doubt.  This sacred scripture is like an axe for the dark age of Kali to those who hear it in reverence.  There are innumerable names for this being we call Rama, this has been taught by the Vedas.  Similarly, there are innumerable virtues and pastimes which he has shared with us, moreover, unconditional is the love which he extends throughout the universe.”

“I feel saddened that there are not more beings like you, who delightfully seek Shri Rama.  Most beings are now lost to greed and to busy chasing worldly desire.  The have no desire even to meet with beings who have dedicated their whole lives to the welfare of others.  They often make thorny statements about the teachings of the Vedas.  The mirrors of their hearts are covered in dust, hence how can they cultivate love? They have no desire for knowledge of the formless supreme reality that is Brahman or knowledge of Shri Rama who has taken form, what sense will they speak who are lost to the wine of self-indulgence and infatuation?”

“Let your doubts be wiped away like tears and allow your heart to open.  My words will be like sunbeams for any suffering you feel inside, and will remove all insecurities.”

“Understand that there is no difference between that with form and that which is formless.  Brahman and Rama are one.  This is the teaching of the Vedas. Under the sway of love, that which is formless, the unconditioned ultimate reality takes form, it is all due to love.  Just as water and the hailstone are the same in substance, the absolute and the qualified are the same in substance. That substance is love itself.”

“Shri Rama is truth, consciousness and bliss. No ignorance exists within him.  His very being is the light of the world. humans experience joy and grief, light and day, ignorance and bliss, but Rama is the absolute all-pervading truth personified.  He is Brahman.  He is what people call God, the Lord, the most ancient being, the ground of reality.”

How can this Rama, the son of King Dasaratha be considered equal to the absolute reality of all things?  This is not just the question of Uma, but is the question of most people who will be reading the Ramayana.  This question has been masterfully placed here so that we can understand that Rama and Brahman are non-different.

Hindu dharma is like a boundless ocean teeming with priceless gems. The deeper you dive the more treasures you find. In Hindu religion, God is known by various names. Thousands of people look doubtless upon Rama and Krishna as historical figures and literally believe that God came down in person on earth in the form of Rama, the son of Dasharatha and by worshipping him one can attain salvation. The same thing holds good about Krishna. History, imagination and truth have got so inextricably mixed up. It is next to impossible to disentangle them. I have accepted all the names and forms attributed to God as symbols connoting one formless, omnipresent Rama. To me, therefore, Rama described as the Lord of Sita, son of Dasharatha, is the all-powerful essence whose name inscribed in the heart removes all suffering — mental, moral and physical.

This is not the story of a Prince, neither is it a scientific theory about the nature of reality, it is all of these but most importantly is the story of our hearts, it is an inquest which our mind cannot solve.  The narrative itself will clear all birds of doubt away.  Lord Shiva will now proceed to reveal the truths of the Ramayana to Uma for the benefit of all living beings.