77. Lanka, Our Own Kingdom of Desires

HomeUncategorized77. Lanka, Our Own Kingdom of Desires 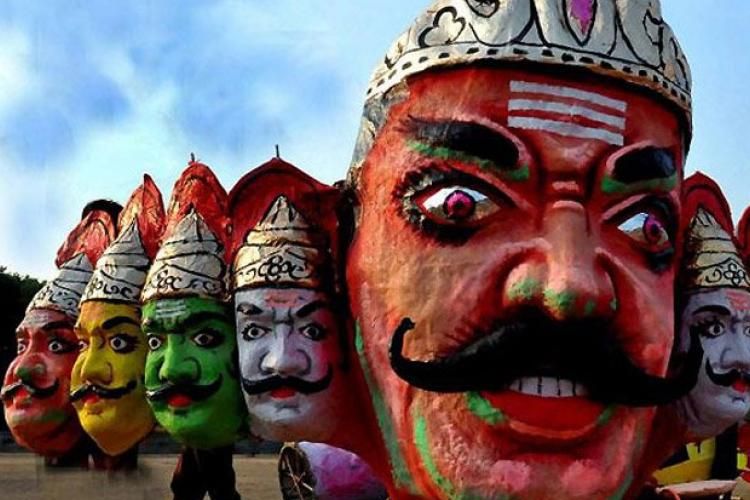 Mandodari, the daughter of Maya, married Ravana.  As part of this marriage Maya constructed for them a majestic fortress on the island of Lanka. It was greater than anything that existed on Earth.  Decked with gold, silver, and precious jewels, even the fortress walls shone resplendently.  The oceans surrounding the island kissed the Kingdom’s golden walls as if bowing to the architectural marvel that had been created.

On the island of Lanka lived great demons lead by their king Ravana, even the Gods were disturbed by Ravana’s ever increasing power. Displaying his might at every opportunity, Ravana even lifted the holy mountain of Kailasa before Shiva himself.

Ravana’s glory grew as he conquered region after region. With every new gain, his passions and greed were further stoked. With his brother Kumbakharna the giant by his side, he felt invincible.  Fortunately for the world Kumbakharna slept for six months a year, if he were to eat every day, the food on the planet would quickly be exhausted!

Skilled with the power of maya (illusion and deceit), Ravana’s demons brought distress to living beings all over the world. With his arrogance consuming him, Ravana said to his court, “Every heavenly or godly being should be considered my enemy. Kill them all! Ruin the prayers and rituals of spiritual people throughout the world.  Where there are Brahmanas, interrupt their offerings, prevent them from eating and ruin their chanting. Without their spiritual practices they will lose their minds.  Even the Gods will kneel before me when the chaos ensues. Whether I kill them or keep them alive, this I shall decide once the world is under my control.”

Ravana called forth his eldest son Meghanada and said, “Conquer the Gods my son, capture the riches of the Earth and display our glory!”  Roaring like a lion, and mad with lust, Meghanada vowed to bring his father’s wishes to fruition.

Everything they did was contrary to the words of the Vedas, everything they stood for was adharma (unethical).  Whatever Ravana instructed his ministers to do they executed it with precision.  They tormented the Gods of the sun, the moon, the wind, the earth, men and women, nobody was spared! Ravana did everything he could to eradicate sacredness. The cows were killed, Brahmanas captured, no village was spared.

Dharma was nowhere to be seen, love of God disappeared, there were no Gurus, no wisdom. Nobody would even dream of reading the holy Vedas or Upanishads.

Nobody meditated or chanted mantras or performed Yoga.  If Ravana heard of a compassionate act occurring he would destroy it.  Such was the corrupt state of the world. With every act of evil, the hunger for more evil grew, such was the power of awful deeds.

The terrible vision of Lanka under the rule of Ravana shows us the darker side of our nature.  When under the spell of desire and anger, we lose all sense of virtue and become lost in an endless quest for more and more gratification.  Ravana and his kingdom represent negative attributes like greed, anger, selfishness, harm, untruth and arrogance.  This is what tradition calls the asuric disposition.  The Bhagavad Gita gives us a description of this malevolent disposition in chapter seventeen.  Shri Krishna reveals lust, arrogance, conceit, envy, pride, anger, selfishness as some of the attributes of the malevolent. It is in Ravana’s Kingdom that we see the contrast to a better way, which is a spiritual disposition and is personified by Shri Rama, the embodiment of unconditional love.