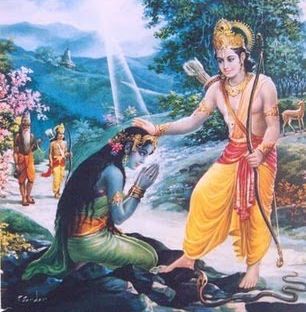 The following post is one from the Ramacharitmanas series by Hanuman Dass.  Every week, we move forward in our journey through the Ramayana of Love, as spoken by the great Saint Tulasidas.  The Ramacharitmanas has been described by the Acharya Vinoba Bhave as being similar to a cross between the Bible and Shakespeare. The Ramacharitmanas is like an ocean of love and bliss and the hope is that these posts will provide a sense of the bhava and how one can benefit by way of immersion in its waters.  Above all else, the Ramacharitmanas is a journey in love, and as Neem Karoli Baba has said, ‘Love is stronger than electricity’.

Vishvamitra was a very pure and beautiful being, but he was being harassed by two demons, Marica and Subahu.  These demons relentlessly pursued Vishvamitra.  Whenever he was making his offerings to the Gods, they would desecrate his ceremony.  The sage repelled this abuse for many years before realising there was nothing more he could do. Only Shri Hari was capable of stopping the demons. Vishvamitra knew that the Lord had ascended to Earth and was living among the Raghu dynasty. He resolved to visit the royal palace thinking, ‘I should seek the Lord’s help. He has come here to relieve mother Earth of her suffering.  My eyes will be eternally blessed by the sight of he who is the root of all knowledge and virtue.’

Vishvamitra followed his daily practise of bathing in the river Saraya and recited prayers before heading for the Kings court.  As soon as Dasaratha became aware that Vishvamitra was coming, he sent thousands of brahmanas to greet him.  They all fell full length on the floor in prostration to the great sage. Vishvamitra was given a royal reception,  He was given a throne to sit on and his feet were washed with great reverence.  He was offered all kinds of wonderfully prepared foods and was amazed by the extent of Dasaratha’s hospitality.

The Shri Rama arrived at the court with his three brothers to touch the feet of the great sage.  At the sight of the Lord, Vishvamitra completely lost himself in ecstasy. The throne, the hospitality, the wonderful food, all of these were like dust compared to the sight of Shri Rama.  The sage whose mind was usually held in perfect equanimity was now filled with the rapture of love.

It is believed that the Chakora bird can live from the nectar of moon beams alone.  Like the Chakora bird, Vishvamitra was completely fulfilled by the rays of love emanating from Shri Rama.  The King said, “Vishvamitra, I cannot thank you enough for coming to our palace.  It is a great blessing for us all to be in your presence.  Please ask me for anything you desire, I will be happy to help in any way I can.”

Vishvamitra said, “I am thankful for your hospitality.  For such a long time, at the hands of the demons in the forest, I have endured much suffering. Please allow Shri Rama and his brother Lakshamana to come and live with me at the hermitage. Only then will I be safe there. Entrust them to me, in my care, they will receive innumerable blessings.  With no attachment and with an open heart my King let them come with me to my home.”

Dasaratha was taken aback by the sage’s words, sitting back on his throne he said,  “The thought of being separated from my beloved sons makes me dizzy.  He continued, “My Lord, I am now an old man and these children are my life.  You have not thought through what you request of me. Ask me for anything else…I can build you a new hermitage with acres of safe land, with hundreds of cows, with precious jewels, with anything you ask.  I can give you everything I own.  I can even give you my life, but the thought of being separated from Shri Rama is unbearable, let alone allowing these young boys to fight with demons. Vishvamitra was filled with joy when he heard Dasaratha’s words.  To see the heights of love was indeed very rare. Dasaratha was living in the bhava of Shri Rama and Vishvamitra could feel the loving devotion.

The sage, who was one of Dasaratha’s greatest teachers, pleaded with Dasaratha to allow the boys to go with him to the forest.  After much convincing, the King agreed.  He pulled the two boys, Shri Rama and Lakshmana, close to his chest, held them tightly and said to Vishvamitra, “My children are dearer to me than my own life, please take care of them for you are their father now.’

The young boys touched their father’s feet and received his blessings to go . Filled with tears in his eyes, Dasaratha told the boys to go and receive the blessings of their mothers before leaving.  The two boys, embodiments of love and compassion, the very foundations of the Universe, left the palace to live in the forest with Vishvamitra and save him from the demons.

Shri Rama was beautiful, with brown eyes, broad chest, muscular body and dark skin. Draped in yellow cloth, he carried a beautiful bow and arrow on his hands. Lakshamana was fair skinned, tall and strong, also carrying an exquisitely designed bow. Vishvamitra with the Lord on his side, now truly realised that the Lord works for the welfare of all living beings. On account of his welfare, Shri Rama had even left his own father. Whilst walking to the forest, Vishvamitra was spotted by the demoness Tadaka.  She heard their gentle voices and approached them with a furious scream.  The Lord as if in slow motion, took out a single arrow, fired it from his bow and took the demon’s life. Recognising her to be deserving of compassion, the Lord took her soul into his own state of being which is truth, awareness and bliss.

The sage looked upon Shri Rama and granted him a sacred mantra; the mantra was for life-long protection from hunger, thirst, and unequalled strength in battle. When they reached the hermitage, the sage prepared a simple meal of bulbs, roots, and fruits for the two boys.  The sage saw the boys as his very own and lovingly made a place for them to sleep.

At the break of dawn, Shri Rama said to his teacher, “You may now go and without worry perform your sacrificial ceremony without any fear of desecration by the demons.  I will protect you.”  The forest sages gathered and poured their oblations into the sacred fire as Shri Rama stood guard. The demon Marica, a great enemy of the forest sages, approached with an army of demons.  Shri Rama once again, took out a single arrow and aimed it at Marica.  He fired the arrow and with a single shot the demon fell to the ground. His younger brother Lakshamana with great ease defeated the entire army of demons.  Removing the fear from the hearts of the brahmanas, Shri Rama and Lakshmana were praised by even the gods in heaven. Shri Rama stayed there with the sages for many days showing them great love and attention.  Even though Shri Rama is all knowing, he stayed with the sages listening to them recite the stories from the Puranas. Then Vishvamitra said, “Let us go and witness the ceremony of the bow.”  While they walked, they came across a strange ashram.  Shri Rama asked, “What is this place? There are no birds, no animals, no people who live here?”

The sage duly explained, “The sage Gautama’s wife has assumed the form of a stone under a curse.  She patiently seeks the blessings of the dust from your feet.  Please be compassionate to her O Lord.”  At the touch of the Lords feet, which removes all suffering, Ahalya emerged from the stone, a true embodiment of religious austerity. Seeing the resplendent Lord, she stood with hands in prayer reverently.  Her heart was beating with love and the hairs on her body tingled as she was unable to speak.  She fell at the Lord’s feet pouring tears of love from her eyes.  As she recovered from the ecstatic state, she realised that it was a tremendous act of grace that she experienced the love of God. She said, “Glory to Shri Rama, who is known through love alone, even as a dirty stone, I have seen the tremendous love which the Lord extends throughout the world.  O Lord, I pray that you save me.  The sage Gautama has cursed me but I see it as a blessing, I have taken refuge in you.  My eyes are sanctified at the sight of you.  Lord Shankara has said that the sight of the Lord is the greatest blessing of all.  My heart is pure and I wish for only one thing in this life…I deeply crave that my mind continues to be fixated on the dust which rests on your feet.  Just as a bee which produces honey from nectar, I experience spiritual love from the dust on your feet.”

Touching the Lord’s feet with her head Ahalya received Shri Rama’s blessings and left for her home. The Lord Shri Rama is the greatest friend of the humble, and deserted.  He is love, he is compassion, O Tulasi Das! Give up deceit and any thought of cheating and live in love!